As the winter months approach, the Two Oceans Aquarium’s Turtle Rescue, Rehab and Release Programme is seeing more stranded turtle hatchlings on the shores of Cape Town and the Western Cape. Juveniles are swept down from the northern coast of Kwazulu-Natal in the powerful Agulhas Current then washed ashore by rough seas. These hatchlings are often weak from dehydration and the cold. Concerned members of the public are bringing them in to the Aquarium, who is advising beachgoers to be on the lookout for these hatchlings.

What to do if you find a hatchling? 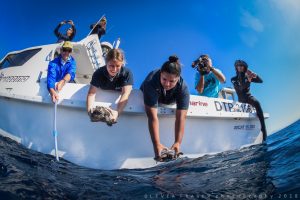 Turtles being released into the ocean by the Two Oceans Aquarium.

The Turtle Rescue, Rehab and Release Programme is working to save the turtles of South Africa. Their patients are primarily the leatherback and loggerhead, who nest on our shores, but also include green, olive ridley and hawksbill turtles. Their efforts along with those of organisations, volunteers and donors have resulted in hundreds of turtles being saved, nursed back to full health and released into the wild where they belong. 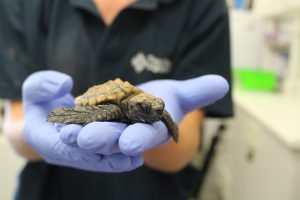 A turtle hatchling in the hands of its caretaker.

It takes on average R27 per day to rehabilitate a turtle. But many are far from average and take a lot more effort and funding. Please consider supporting these eco-warriors by donating via their page. Every bit helps!

The Ocean Race | A New Era