The much anticipated PRADA Cup starts tomorrow, and all eyes are on the Challengers, the teams who showed their hands in December as worthy contenders. After the America’s Cup World Series teams went away to work on their strategies, make improvements to their boats and use the learnings to improve on all levels. All this in line with claiming the right to challenge Emirates Team New Zealand for the America’s Cup trophy.

Shirley Roberston was the on-the-water reporter during the America’s Cup World Series held in December. Shirley, Ken Read and Nathan Outteridge analysed the racing, the boats’ performances, and gave insight into the most likely victor as the Challenger to the Defender, Team Emirates New Zealand.

In a 2-part podcast Shirley chats to Ken and Nathan about what they took away from the ACW Series, and who they think has the speed and the ability to take on the Defender.

Listen to both podcasts here.

How the Prada Cup racing works

The team with the most points at the end of the Round Robins moves directly to the PRADA Cup Final, while the remaining two teams compete head-to-head, in a best of 7 Semi-Final match from 29th January to 2nd February.

The PRADA Cup Final, between the13th and the 22nd February, will be a series of thirteen races where the first team to reach seven wins will win the exquisite PRADA Cup trophy. The winner will earn the title as the Challenger of the 36th America’s Cup presented by PRADA, racing against the Defender, Emirates Team New Zealand. 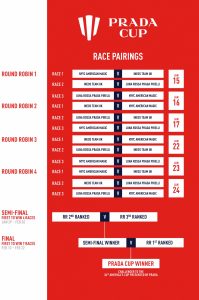 To win the America’s Cup, first you have to win the PRADA Cup

The racecourse will be a windward-leeward configuration outlined by boundaries with an upwind start. Its length (approximately between 1.1 to 2.2 nm) will depend upon the exact location of the course and the prevailing weather conditions. The permitted wind range is between 6.5 and 21 knots for the Round Robin races and the Semi-finals, and between 6.5 and 23 knots for the PRADA Cup Final.

The race course will be decided on the day by the Race Management.