The 36th America’s Cup presented by PRADA was defined by foiling monohulls. Where innovation is the name of the game, developing and building a flying monohull was the biggest technology challenge that designers faced.

What is a foil?

A foil works in a similar way to the wing of an aeroplane, but instead of giving lift in the air it gives lift above the water. It has the same scientific principles of aerodynamic foils, which exploits a flow to create the “lift” – the upward thrust that allows the boat to rise above the water.

The result is a greatly reduced drag of the hull compared to a displacement hull, thus allowing significant gains in terms of speed and performance.

The foiling system on an AC75 consists of arms, wings, and flaps. Each foil arm is attached to the hull, with wings and flaps positioned on its extremities. 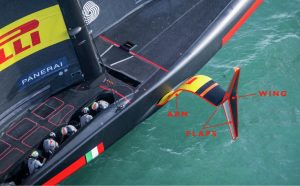 The foils of the America’s Cup

While the foil arm is a one-design element (identical for all boats) the wings and flaps can be developed by each team according to a box rule. The wing must fit within a trapezoidal-shaped box according to measurements established by the class rule. The wing must also meet specific criteria, in terms of weight and gravity. In the AC75 class, the wing must not only create a hydrodynamic lift, allowing the boat to rise, but it must also act as a ballast and create a downward force to avoid the boat from capsizing.

This balance is very delicate, a factor that has added great complexity to the design of these foils. It was a real challenge for the team of engineers, especially when it came to the choice of materials used. The wings of the AC75s are made of lead to ensure density and weight, and steel, which is an excellent material for structural solidity.

Several wing shapes were developed for these boats, and each team chose the design that best suited the features of their hull and their crew’s sailing style. As established by the rule, each team was allowed to build a maximum of 6 wing foils and 20 flaps.

For the America’s Cup Final Match Emirates Team New Zealand opted for a T-shaped wing, whereas Luna Rossa Prada Pirelli chose a Y-shape foil. Each design has its advantages and disadvantages. But can one put the NZ win down to the foil choice alone?

A T-shaped wing meets the water surface (piercing) without creating particular issues in terms of ventilation, which is what happens when air gets sucked down to the lifting surfaces. This creates a stall phenomenon that stops the flow and can cause the boat to fall off its foils. The T-shape also reduces the wet surface, with consequent speed gains. 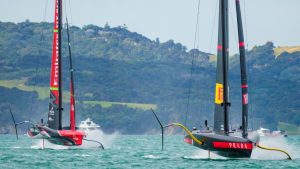 The advantage of a Y-shape configuration is that the flap at the end of the wing can be trimmed independently, which means that the wing is split into two elements: the leeward side controls the flight level, and the windward one allows to adjust the drif. A Y-shape wing allows greater control in the boat handling.

The choice of the wing size depends on the hull shape and the sailing conditions. Generally, with a larger wing size, the boat can perform better in manoeuvres, especially in the take-off in light winds, in tacks and jibes. The downside is a greater drag on water surface, thus a slight loss of maximum speed.

The real challenge for the designers was to find the right balance between speed and boat handling, considering the hull and crews.

We are still at the very beginning of the foiling era, and there’s much more to be developed. The America’s Cup is acknowledged for leading the way in racing foiling monohulls at such a high level.  We look forward to increasingly advanced level of research in the field of fluid dynamics to come. 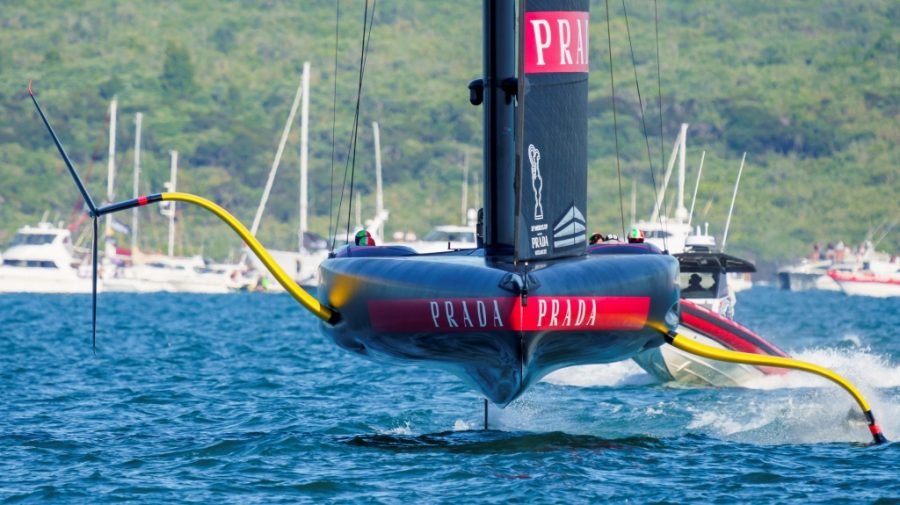 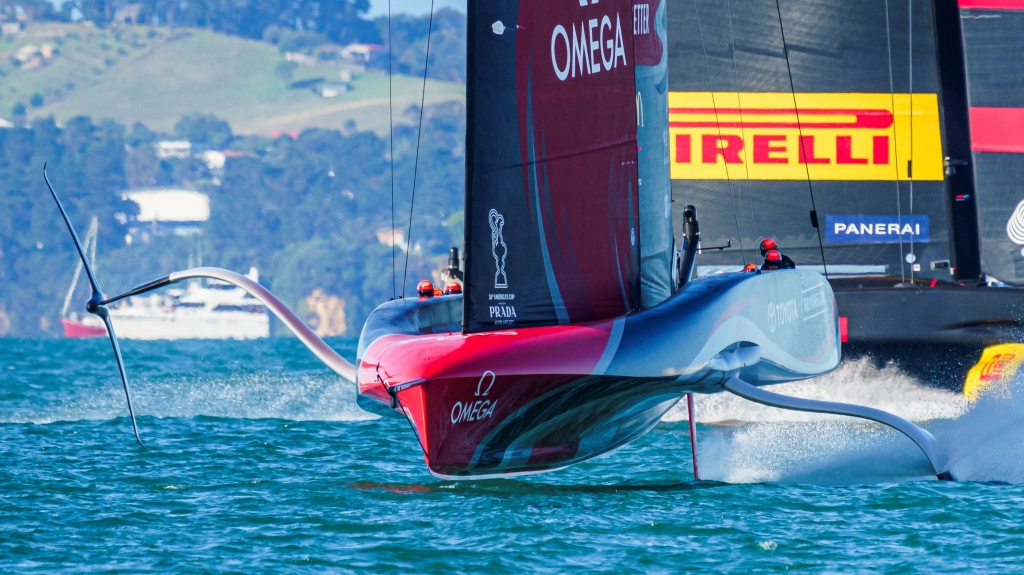