The 2019 Lipton Challenge Cup got off to a cold and wet start today in a typical Cape winter’s North West North wind. This Ed was pleased to be watching the racing from the comfort of the beautiful Princess yacht, Ocean Princess.

After racing was cancelled yesterday due to a winter storm, the teams were itching to go today. Boats were tuned, sailors were prepped and the race committee, under the expertise of SRO Doug Allison, were prepared to pack in the required races. The racing started just after the allotted time of 11am.

The Lipton Challenge Cup requires that 3 prescribed courses need to be sailed throughout the regatta. Today’s race took care of the quadrangle course – a box.

Royal Natal Yacht Club’s Orion helmed by Mark Sadler, fresh from the Copa del Rey regatta in Palma, started the event with an OCS. With the deep talent pool in this year’s competition it is not easy to catch up from the back of the fleet. But with the level of experience that Mark and his team have, they managed to catch up to 6th after crossing the start line last. 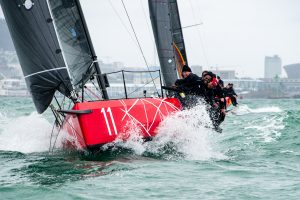 Nitro in the Lipton Challenge Cup

Race 2 saw the defenders, Royal Cape Yacht Club’s Yanmar take the win. After a tight dice with MB Racing for first and second around most of the course and with interference from a few patches of kelp and plastic, they managed to take the win. Nitro overtook MB Racing on the last leg to steal their second place.