And although it’s Quantum Racing’s fourth world title win during the ten year history of the 52 SUPER SERIES, and their second ‘worlds’ win in Cascais, this 2022 championship is even more special as it is the first title won with owner-driver DeVos on board.

After four days of precision positioning and taxing tactics on an unusually light winds race arena (for Cascais that is), fthe North westerly trade winds finally came pumping down the race track at 20-22 knots, and the surf built up to offer the brisk racing conditions sought after by the nine-boat fleet.

Quantum Racing started the day with a three points lead over nearest rivals, Harm Müller-Spreer’s Platoon. And while the German team started better in both races and seemed set to take the fight to the Americans, the new champions prevailed. On the first upwind they broke Platoon’s cover and went on to win while Platoon were penalized for a rules infringement.

On the second, breezy windward-leeward race, Quantum Racing were ahead after a scrappy first upwind saw both title challengers deep at the first turn. From that point on Quantum Racing just needed to cover their rivals to win – “by keeping ourselves between the man and the hoop’, said a victorious, champagne-soaked Terry Hutchinson. 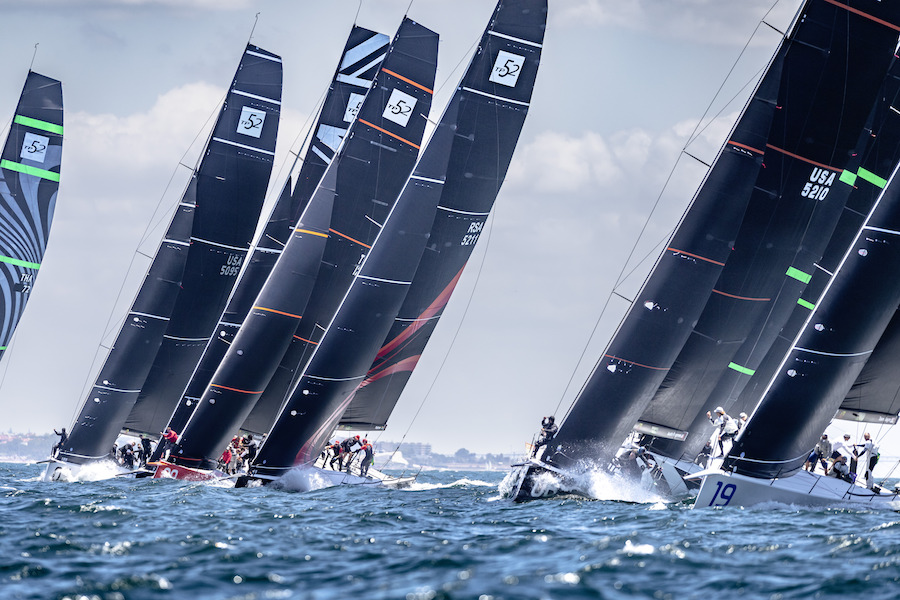 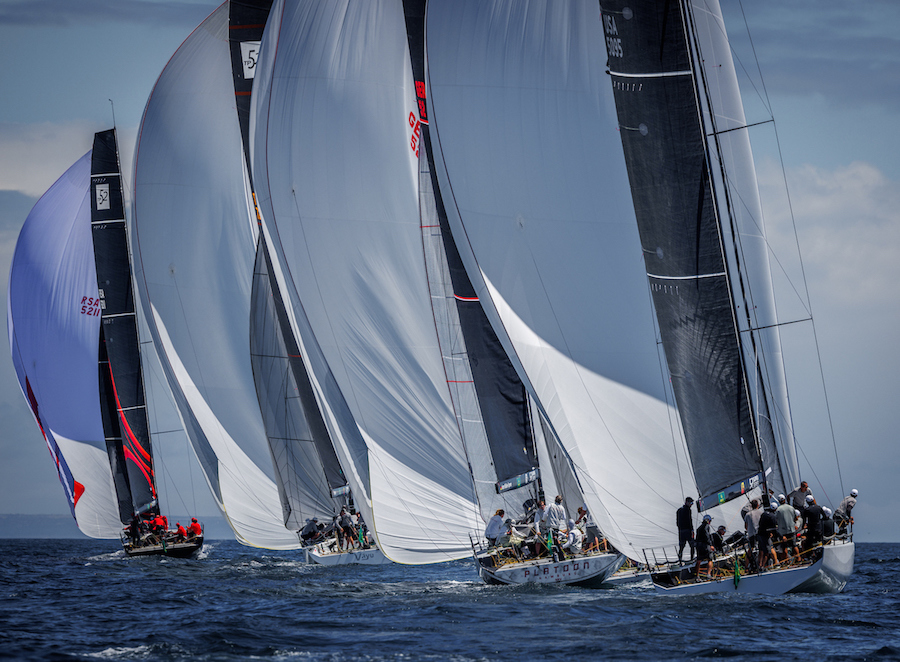 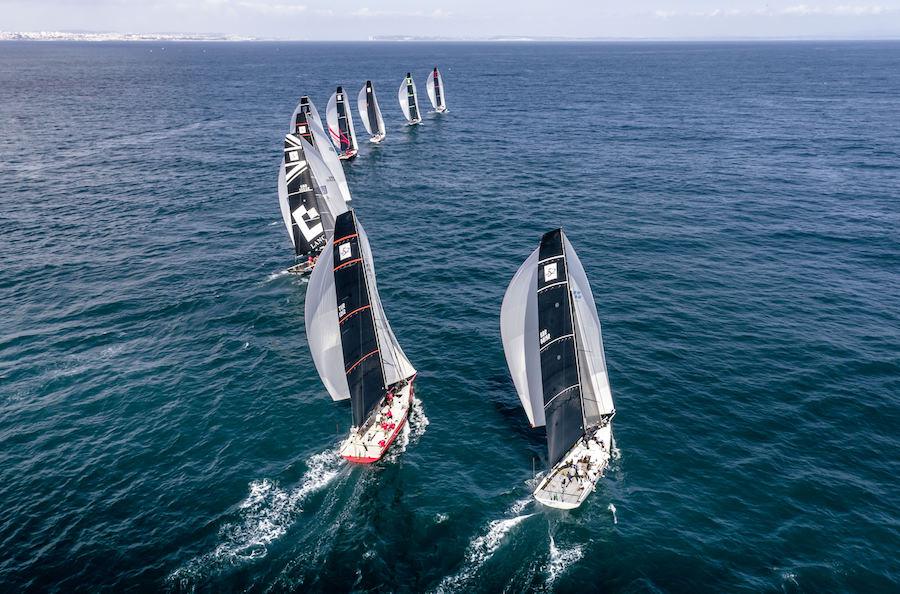 Quantum Racing won by seven points ahead of Platoon and eight points ahead of Andy Soriano’s Alegre. Alegre also had a solid week finishing strongly to end up on the podium, just as they did in the 2018 Rolex TP52 World Championship on these exact same waters when Quantum Racing triumphed.

The champions’ margin is a meaningful one given how incredibly close this class is at the moment, but wins and losses – especially upwind – were often down to metres, or fractions of a metre.

Hutchinson said, “The entire event was close. You take the good with the bad. It’s ironic today as the previous four days we started really well and today we didn’t start so well. We were a bit conservative. It’s hard here as we all have the right on the brain but its how you get there that’s the tricky part. I give Alegre and Platoon high marks there. We won our last world championship here in Cascais so it’s getting pretty special for us. The neat thing about this championship we’ve won with Doug on the boat – to be able to share this with him is awesome.”

From the very outset, Quantum Racing presented their credentials to claim their fourth world title. Winners in 2018, the team arrived in Cascais as one of the favourites. Through a combination of focus and determination, they carved a position at the top of the leader board from day one. While rivals alternated race wins with more average results, Quantum Racing remained calm posting solid results in virtually every race. Tactician Terry Hutchinson cleverly moved the pieces on the chess board towards the end goal by sailing smart and avoiding too many risks.

An untimely slip by Quantum Racing on the fourth day meant that the overall result remained in the balance just as Cascais welcomed strong conditions for the final day of racing. Harm Müller-Spreer’s Platoon had climbed the rankings through the week and, thanks in part to the leader’s sub-par result, was within three points of the lead with two races to go.

Quantum Race delivered their best performance of the regatta in the penultimate race, securing a first race-win of the championship and, in doing so, firmly closing the door on Platoon’s aspirations, despite the German crew’s fourth place finish. It was a masterclass from the American team in the toughest of racing. Ultimately though, it was the effort throughout the series that had delivered the title. The leader board shows five other teams winning races, confirming the potency within the fleet, but none had been able to match Quantum Racing’s ability to avoid posting too many crippling scores. 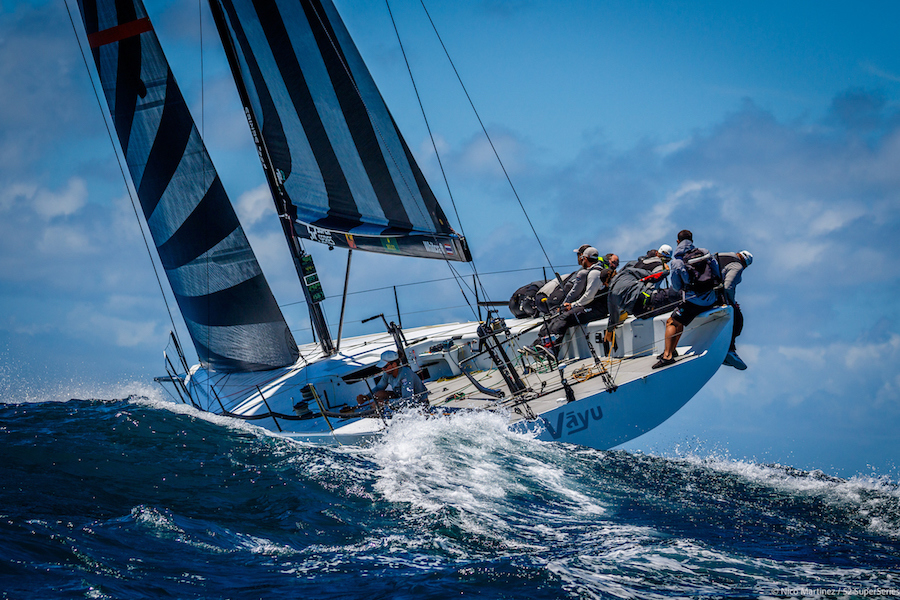 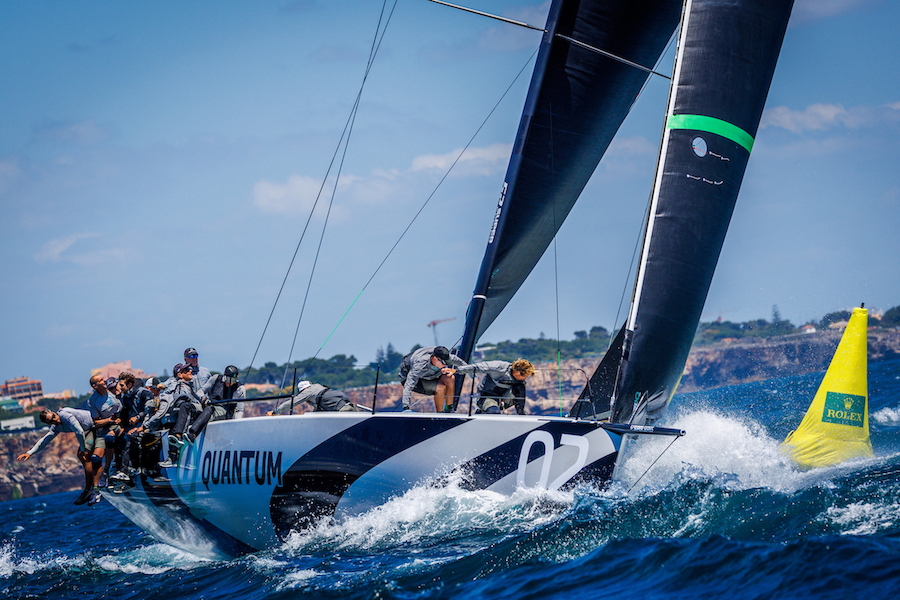 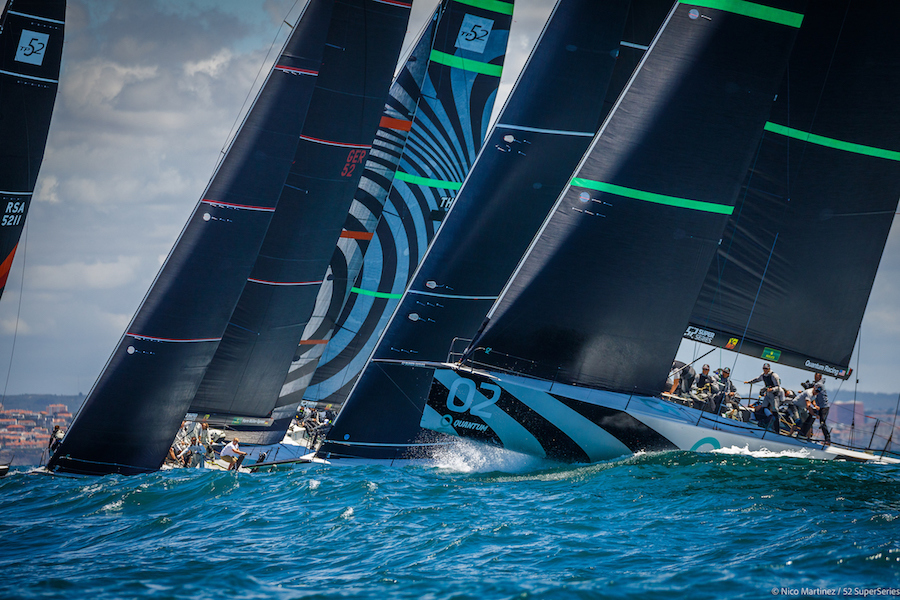 It’s all in the communication

SA’s team Phoenix were in 3rd overall going into the final day. They had fought hard in light airs sailing against a very accomplished fleet to be in this position going into the finals. But it was not to be – they lost their third place to Alegre by just one point. Once again testament to the strength of the competition.

Olympic champion and two-time Rolex World Sailor of the Year, Tom Slingsby is tactician on the Plattner family’s South African entry, Phoenix. He arrived in Cascais fresh from Chicago, where he had skippered the Australian team to victory in the second event of SailGP Season 3. Slingsby was quick to identify the key element to succeeding in the TP52 fleet. ”Everything relies on teamwork and communication. The communication part is still really tricky for me. I grew up sailing single-handed Laser dinghies for 15 years. You don’t need to communicate; you just react as soon as the thought hits you. Here, communicating is making sure you use the right wording, use the right tone, paint the picture well for the people who have their heads down.”

In a world championship where every point is precious, it is not possible to play your own game if you have an eye on the main prize. According to Slingsby, you also have to anticipate your rivals’ moves and implement a full race strategy. “It is a complicated chess game. You really try to predict the future, to predict what the other teams are thinking, what are their priorities. You are up against the world’s best sailing teams and the world’s best tacticians. It’s a very fine line. And that is only the racing part of it. You also have to think about the course: where is the better current, what side is the better wind, what is the better wind shift… There are so many pieces of the puzzle to put together if you want to get it right.” 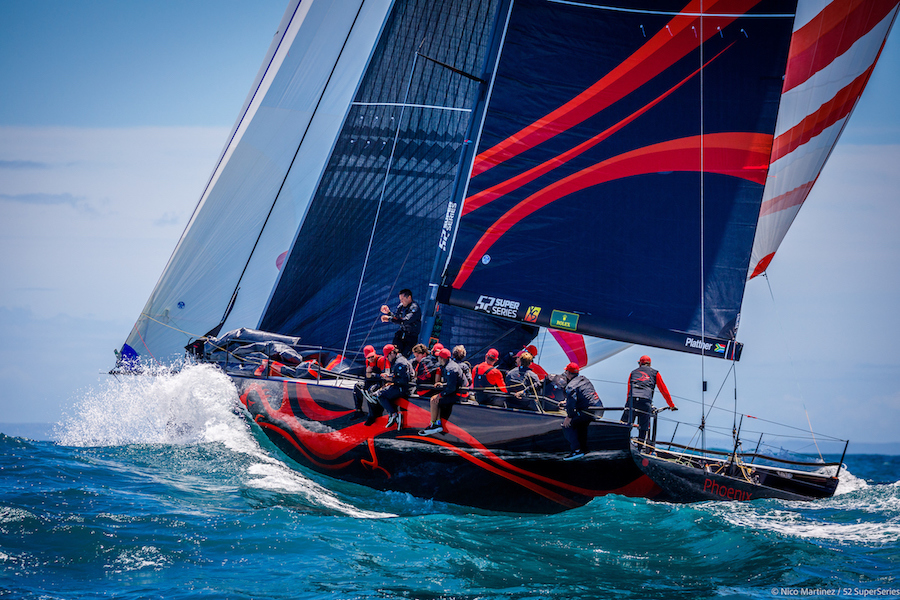 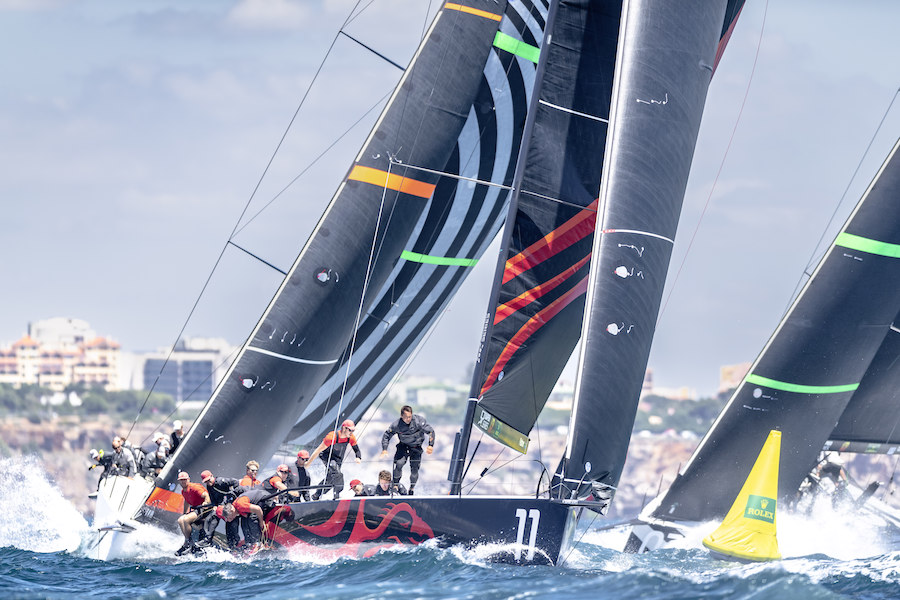 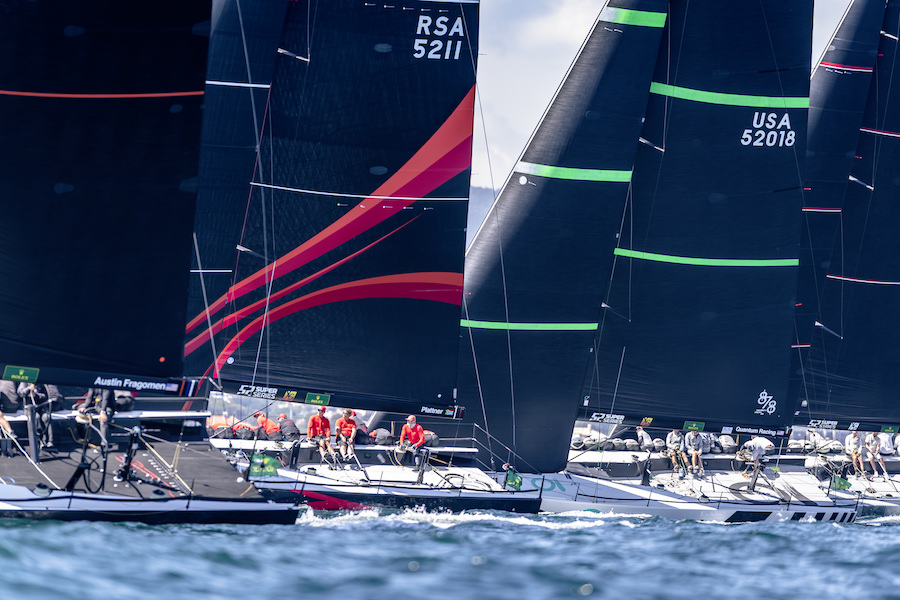 The championship is considered the crown of monohull grand prix competition. The 2022 edition of this annual event, partnered by Rolex since 2017, gathered nine teams from six countries and a selection of elite sailors for five days of dramatic and captivating competition in Cascais, Portugal.

The 2022 edition of the Rolex TP52 World Championship attracted the usual mix of passionate, committed owners and crew that included Olympic medallists, round the world and America’s Cup winners, and world champions in a multitude of sailing disciplines. The best of the best.

With evenly matched racing yachts and no discards across the ten-race series, the TP52 formula guarantees hugely competitive racing. Success demands a combination of skill, commitment and concentration.

At the final prizegiving at the Clube Naval de Cascais, Quantum Racing was crowned 2022 Rolex TP52 World Champion to the rapturous applause of their peers. Testimony of the crew’s ability to adapt to the elements and summon their deepest resources in the quest for excellence. It had taken a masterful combination of skill, perseverance, and team spirit to stand out among such talented opponents.

A natural and supportive partner

Rolex has always associated with activities driven by passion, excellence, precision and team spirit. The Swiss watchmaker naturally gravitated towards the elite world of yachting six decades ago and the brand’s enduring partnership now encompasses the most prestigious clubs, races and regattas, as well as towering figures in the sport. This includes groundbreaking round-the-world yachtsman Sir Francis Chichester and the most successful Olympic sailor of all time, Sir Ben Ainslie. Today, Rolex is the partner of 15 major international events – from leading offshore races such as the annual Rolex Sydney Hobart Yacht Race and the biennial Rolex Fastnet Race, to grand prix competition at the Rolex TP52 World Championship and spectacular gatherings at the Maxi Yacht Rolex Cup and the Rolex Swan Cup. It also supports the exciting SailGP global championship in which national teams race identical supercharged F50 catamarans on some of the world’s most famous sailing locations. Rolex’s partnerships with the Cruising Yacht Club of Australia, Yacht Club Costa Smeralda, New York Yacht Club and Royal Yacht Squadron, among others, are the foundation of its enduring relationship with this dynamic sport